This section allows you to view all posts made by this member. Note that you can only see posts made in areas you currently have access to.

Las Vegas bars owners face a COVID-19 shutdown. They say it will take years to recover

Baccarat Forum / Re: Your mind will wander

« on: September 14, 2020, 04:33:52 pm »
I wrote this back in 2017 and people talk about some things in here like they finally found freedom in the knowledge of the game, trying to control their emotions and the knowledge of knowing what MMM is in playing baccarat.

Here.  All this was written by me a long time ago.
3

Sports Betting Forum / Re: Vikings and the Packers season opener

Don't forget guys it's very easy to armchair quarterback the right decisions after you see the whole board all written or typed out. It's not that easy at the table in a live game with real money.
5

Sports Betting Forum / Re: Vikings and the Packers season opener

Vegas is out of action for at least another year until there is a vaccine...and even then, many people will choose not to get vaccinated, so there is still a chance the virus will keep on spreading.

You are exactly right.

The problem with Vegas is it turned from really gambling for the majority of its revenue into the resort, club, parking fees, resort fees, entertainment and party revenue rather than what it used to be.

With the majority of the visitors paying out-of-pocket for almost everything and gambling as a sideways entertainment rather than the opposite way around, what it was for years up to I would say around 2,000 Vegas took on a huge expense with everything they provide to bring in the crowds and now they can't bring in the crowds to spend money.

Now with the other venues even where I live in the middle part of the United States table games are routinely up to $5,000 at even the smaller properties and $10,000, $25,000 table limits and greater a hand at the highest majority of the national branded casinos.  So for the serious players there's no need to go to Vegas. And they get extremely well comped for what they need as far as a suite, great food, etc., as well there's no other nonsense charges, there's no other travel fees, they don't have to take away from their business or their family to gamble for one or two nights a week and they can play very serious and these other chains have been capitalizing on that extremely well.

People are realizing that and that alone is going to haunt Vegas for a lot longer than when C19 subsides. You could take that one to the bank.
9

Wonder why you post the cards outcome....on my online bac table there isn't Panda or F-7 side bet....only dragon bonus but never attempt to play it...

We have several different types of baccarat now, excess of three different branded versions here in the US at brick-and-mortar casinos. Mostly non-commissioned there is one that still commissioned. There is regular Baccarat, there is EZ BAC, there is BAD BEAT BAC, there is 5 Treasures BAC, and there's more.  There is an assortment of dragon bonus, Fortune 7  and Panda 8, there's several other ones that have integrated within the 5 Treasures game as well as the Bad Beat game that has multiple side Wagers besides from those that you mentioned.  Side wagers anywhere from 1 to 1 to 200 to 1.

A lot of us have been playing where the base bet will cover your side wages if you lose the side Wagers, but if you hit the side wager, you get astronomically ahead and then you can just use that for the rest of your session and lock up a little bit of profit with your total buy in as well and go from there for the session.

The way that I and a lot of other players play is by the outcomes in the numbers within the section, as I talked to you about and the combination of what is happening as well.
10 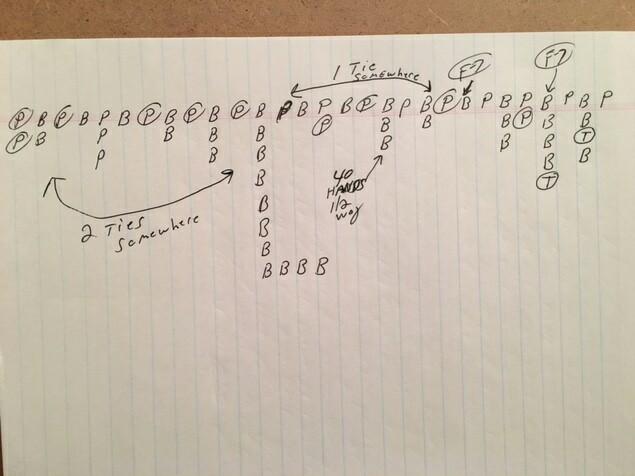 Players with circles are Naturals

Ended over 20 ahead for Banker

After what is shown just ones and twos both sides

After the first Fortune 7 almost every players hand looked good with the first two cards then if not Natural 9 the third card reduced the player almost every time. Several Natural 8s for the players side but the Banker had Natural 9 at least four times.
11


I simply love it the Borgata throwing a stupid sissy hissy fit with what is the normal course of business when Casino Hosts go from one property to another property for a raise in compensation and benefits.  What a waste of the Court's time and all of this information was most likely downloaded the first day they left or just before they left a Borgata anyway, the rest of it's all personal knowledge that the casino hosts have.  There are no trade secrets or unfair Trade Practices, ROMAFL. That would be the same as if a guy was an really great woodworker custom cabinet maker and learned at one business and got hired on by someone else and then that original business saying, you can't make custom cabinets for our competitor.

One salesman doing the job for another competitor that was hired on.  End of story.

Other Casinos / Re: Takeover of the Chukchansi Casino and how it was performed

Register with BetSelection.cc to Remove all ADS and enjoy all features. Click here to register...