« Last post by alrelax on Yesterday at 10:19:27 pm »
Something I wrote a while back, IMO fits in here and playing along side others at the table.

Conflict has a lot to do with playing baccarat in my opinion.  Because, conflict will change your frame-of-mind and how you wager with or without your conscious thought.  And that is not good for you.  Be aware of conflict and how and why it comes about.

Conflict is the result of events, usually events that went the opposite way you wanted them to go or if you were remaining neutral but had a feeling it was going to be a result, and that result came about and others at the table began to proper nicely, conflict can also come.  Be aware.

Conflict:  Events, Comments, Situations.  The various things that lead to those three and usually opposite of what you desired or spot-on, but you were not wagering at all or cut way down in the amount of wager.

Perceived Conflict/Felt Conflict:  The perceived conflict is the logical and factual events which are based around the conflict itself.  In other words, whatever lead up to the exact point of the event.  The felt conflict is your feelings, your hostility, your hurt and other feelings when you see those winnings given to your table-mates whether you like them or not.

Factual Reaction:  Aggression, Competition, Debate, Withdrawal, Tilt.  They all happen and if you do not think so, you better take your time, look at yourself and realize they do.  Fix the problems and play better without a doubt.  We are dealing with lost money or money not rightfully earned here and it gets emotional, admit it or not.  Once you do, you can fix it for the most part.  I have narrowed it down to 5 parts at the baccarat table.

Agreement or Defeat:  We tend to enter into agreement with others that we do or even do not normally agree with at the table, depending on how they are doing at various times.  Follow your own thoughts, rules, beliefs, protocols, etc., sometimes win everything you touch, and other times lose.  Follow others that are winning or going against them when they are losing, works as well sometimes and other times it blows up in your face.  And that is exactly why following or going against someone else is disaster waiting to happen.  Because, IMO you will blame them and not yourself.  You will blame them for their mistakes and that event will launch you even further into frustration and confusion.  So be careful and realize when camaraderie and team-work is beneficial.  If you must ask, you will not use it the correct way anyway.  Using it as a crutch or a catch-all, is not the proper way.

Putting it all Together:  Realize what is happening, why you are making the decisions you are.  Are those decision from the cards, the shoe, the events themselves?  Or, are they from the results you have deduced down from the other people there playing at the table?  Huge difference and huge consequences will come about.  I promise you that.  Learn how and why you do things at the table, you will help yourself to better, clearer decisions and being better focused and dealing with the events as they should be.
2

That is what I want to know from the admin. How this shoe generated 10x to 30x of bankroll. What was an average person's bankroll etc? Interesting to read.

We all followed the player side heavy in the beginning.  Once again, I have written about just that and posted numerous pictures of B&M boards showing just that, especially in the beginning.  As well the 0-1-2-3 LOW TIES which usually reflects the shoe presentments holding steady, no matter what the shoe was producing.  And it did to a 'T' with that shoe as well.

Another great shot with winning in this shoe was in Section C, we all went for the twos as well.  We got every one of them and when it fell off on the 7th one, we stopped with the twos.

Most of us hit the F-7 with at least a quarter out there on the 10th and 11th hands,  I have cited and written about F-7s and what I see as their predominant presentments in relation to appearing in certain numbers and because of a heavy or dominant section or streak of Players winning, etc.

F-7 came again mid-way.  I have said so many times reference the F-7 if it is early enough and low ties and Player heavy, etc., 1 or 2 will almost always produce a 3rd.  Likewise, a 3rd with the same situations presenting themselves and turning Banker heavy or equaling out anyways, with generally produce a 4th and 5th.  And we all went heavy on F-7s, right at the end of Section C where the chop started for the 3 times, especially when it went 4 with that first Player presentment that turned into a double Player where that line is in the start of Section D.

Player side had a much larger amount of natural presentments early on and as well, almost every hand that was not a natural for the Player, their 3rd card either brought the Player side up to an 8 or a 9 and if that did not happen and say the Player had a 6, the Banker's 3rd card almost reduced them every single time. It was not a time or two, it was repetitive, we saw it and followed it.  It continued so we followed, huge difference in not predicting, etc., etc.

We also hit those 2nd line Players heavy and stopped because we saw every single Player natural win would cut to the Bankers side after that second streak of Players that cut with that 2nd tie, some went heavy for just that reason and some wagered Banker with a smaller amount.  Either way, we continued the win.

Actually I too don't think it was such an evidently manifest shoe to give that scale of winnings. Not for me anyway. But always to each, his own.

That is what I want to know from the admin. How this shoe generated 10x to 30x of bankroll. What was an average person's bankroll etc? Interesting to read.
4

« Last post by Lungyeh on Yesterday at 07:44:49 am »
Actually I too don't think it was such an evidently manifest shoe to give that scale of winnings. Not for me anyway. But always to each, his own.
5

We're set to open two sites simultaneously (PublicDomain.fun + BetOnly.fun), one for the software (i.e. pdbets), one focused on the betting content.

Our new forum engine is made from scratch by hand, hence the delay. Users being shared across sites to make life easier on members.

Sites + software come online during the next weeks, sooner rather than later; you'll notice the release post.

Baccarat Forum / Re: simple system I used in baccarat

If you lose those three wagers, repeat the opp-opp-same with a series progression for each losing series of opp-opp-same.


At least that's the way it is written as best I can figure out.

« Last post by alrelax on January 18, 2020, 06:17:30 pm »
Finally, the camaraderie and the heads played together, old school style, rather than the always wagering for the 'CUT' type of player.  Oh yeah, there was 2 players that continually played for the CUT and one got wiped out and the other walked almost even, everyone else made 10-to-30 fold their buy ins.

Here was the board almost at the end of the shoe. 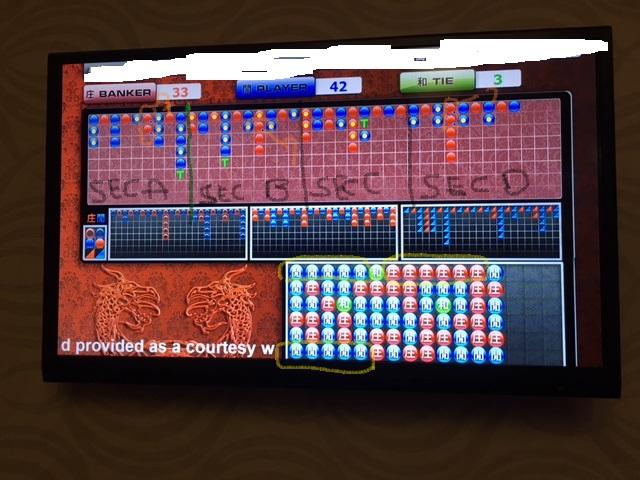 I tried to edit the picture but the tablet I am on is bad with the colors.  I tired, sorry they are not standing out bright.  Anyway, I circled some of the things we all agreed on at the time.  (I have cruised and read some of the Bac ideas and stories on other sites and they are all of the beginner and fallacy type of wagering to the 1,000,000th power!  We do not play that way and sorry for the non-believers and the constant challengers, but the way to profitably play Bac is more old-school and with risk capital that is a small percentage of one's bankroll as I have defined in another thread, sorry---but that is the only real comfortable and long-term way to capitalize on this game).

Bead Plate.  Look at the plate, I tried to circle the ones we all agreed on and the ones where almost all of our wagers were heavy, positively progressed and we won almost every one of those.

The first Sections.  9 Bankers Vs. 23 Players.  There were a few people that believe the Bankers will always prevail thought school, just wager Bankers and you will win long term.  Complete horse garbage!  For those that did, they would have been lucky to make up their losses in the remaining Sections.  9 Bankers/23 Players, then onward to 22 Bankers Vs. 14 Players.

F-7s.  5 Total in this shoe.  Hands 10 and 11.  Back to back.  Notice those were immediately after a Natural 9 Players which most of the time the F-7 does appear after a strong short burst of Players as I have mentioned and wrote about numerous times.  A fact.  3rd F7 was Hand 36 after another Natural Player 9.  4th and 5th F7s.  Amazing, but right there, look.  back to back once again after another Natural Player 9.

LOW TIES 0-1-2-3-4.  I have written about this countless times.  A fact.  Low ties tends to allow the shoe presentments to clump up strong, no matter if the clumping is streaks of repeats, naturals CUT, Chop Chop, 1's and 2's, etc., etc., and so on.  Find the threads and articles I have written, learn and profit.

There are plenty of other things within this shoe, but you know what, I am going to quote another member here:  "....... I see no progress at all on any of the forums these days towards bettering our chances to win. People either gave up on this or a few are busy in churning old school proven failure ideas. Whenever I come up with some innovation and feel like discussing to members here, I see no progress and it feels like talking to wall here. Other forums have more chit chat but many members are foul-mouth and there is no attempt to control that by admins. This forum is the most disciplined one but apart from the admin himself, asymbac, Victor and myself nobody is even writing a single post for months".

I do feel like I am talking to a wall many times as wall, in fact--greater than 'many times'.  The new school way of high tech, score boarding, CUTS, and all that, etc., etc. and as well, the chastising and humiliation drama with the foul mouth drama queens that is so blatantly obvious as a standard.  Most thought or claimed it was just here, but a short cruise around the internet gambling forums, LOL--pretty much mainstream and almost all the same exact players/members.

« Last post by alrelax on January 18, 2020, 10:34:50 am »
You've said a lot in your last post and quite a bit of it is spot on and completely and brutally the honest truth. A few of the points in it were very individualistic, which is what the game of baccarat actually is, like lots of things in all of our lives.

You have inspired me to write something that I'll get started on tomorrow, which it is currently 4:30 a.m. and I just closed the restaurant about three hours ago and had an intense 3-hour discussion with two very serious long-term baccarat players, that happened to be staying overnight because I've held them so long at the restaurant.

I'll outline it in a separate thread, thanks.
10

Register with BetSelection.cc to Remove all ADS and enjoy all features. Click here to register...